When Top Meet a Bottom Part One 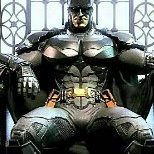